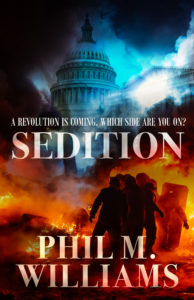 A trucker, a blogger, and a congressman determine the fate of the most powerful empire the world has ever known.

Americans are angry and divided along party lines. They’re tired of the endless wars, high gas prices, and high unemployment. They’re tired of the graft in DC and on Wall Street. They’re tired of being spied on and herded like cattle into the prison industrial complex. Like in years before, they’re certain that, this time, their guy will change everything. The Republican and Democratic saviors make their promises, and the true believers swoon, but domestic terrorists aren’t buying what these politicians are selling.

Truck driver George Chapman is in the right place at the right time to foil an assassination attempt on one of the most influential men in politics. Some might say the reluctant hero was in the wrong place at the wrong time. Some might say it was a false flag. Nonetheless, his fifteen minutes of fame grows because of his extraordinary gift. Will he use his gift and newfound fame to unite the country or to tear it apart?

A revolution is coming. Which side are you on?

What Happened at the Lake